Winter break.
Our next scheduled event will be in February with the ' Lion In Winter' Evergreen Poets. Poets your read during the long winter months, poets who always are remembered and loved.

Here is the Enlightened Tree. Made entirely of books. And a few CD disks. And glue. 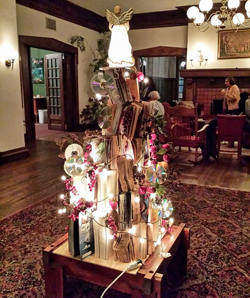 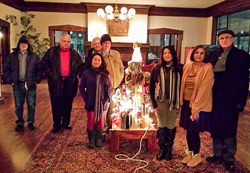 Discussion on the Electronic Currency being used, in Equador. Visibility on how this approach is being used by Ecuador, which has adopted the US dollar since 2000. This conversion to the Digital Dollar was done as soon as the oil pieces dropped.

About the presenter: Retired John Deere, where he worked for more than half of his life, far from his country of birth, Diego still travels to Ecuador three to four times a year.

"Banking: currency exchange: has crypto currency been killed by the IRS?"
Continuing discussions.
All input from the public is requested.
We seek a vigorous discussion.
November 4, 2014

"Banking, FDIC: Money and finance"
Beginning discussions
All input from the public is requested.
We seek a vigorous discussion.
The regular Independent scholars will be guiding the discussion.
Thursday, October 30


"An exploration of the similarities and differences between Vedic, European, and Near Eastern thought."
Michael Rosenthal and Narveen Aryaputri - co-presenters.
Thursday, October 30

Influence of Hinduism on European and Near East Thought. An Informal Discussion.
Michael Rosenthal has completed extensive graduate work in theology, philosophy and psychology at the St. Paul Seminary and the University of Iowa and Western Illinois University.
by: Michael Rosenthal
Thursday, October 9

Wikipedia: the leading resource in Cyberspace, welcomes edits by the
Informed public.
However, at its 10th anniversary reviewers analysis noticed that very few women contributed to the edits, and most of the edits came from a small group of men who were editing repeatedly, thereby defeating the broad base of Wikipedia's open and very innovative ideology.
This evening is focused on looking at how a wider base for edits, including women as contributers can be made a reality.
Thursday, October 2

"Oral History. Life on the Mississippi: The New Millenium"
This story of our area,  written in archival ink and longhand, is maintained at the Independent Scholars Evenings for entries and occasional readings.
Thursday, September 25 - 7:00pm

Krystal teaches classes in Wholistic living with an emphasis in health education with self responsibility model. She has taught in Dominica and in the U.S and is Co-founder of Moon-Cat Life-Sustainability. Krystal lives on a Perma-Culture Farm with her husband Jerome and daughter Phoenix. She can be reached at www.mooncatlife.com

Who is Aaron Brown?

It is not necessary to have attended the previous session to attend this one.

"Together You And I Can Stop Pollution: Conservation is Freedom" *

Coinciding with the River City Radio
Hour with the music of Jason Parchart.

"Owed to Kris:
A Tribute to the American Songwriter."

"Songs by singer/songwriters across the music spectrum."

A discussion of some of the current and potential earth changes being tracked by a multitude of internet observers and a brief review of some time cycles theory.

Michael Rosenthal is an Independent Scholar. He has completed extensive graduate work in philosophy, religion, and psychology from the University of Iowa and in his independent study.


" Planning and The Rule of Law "
Readings from this chapter from ' The Road To Serfdom' : By F.A. Hayek. Edited by Bruce Caldwell. 2007 University of Chicago Press edition.


Copies of the chapter will be available for co-learners to take home with them.


Due to the success of the previous session, a new session is being reviewed this week.

" The FANtastic Art of Mayli Grady"


Doors open at 6:30 p.m.
Elevators are located on the 16th. Street entrance.
About the presenter:


Mayli Grady is a sophomore at Davenport West High School.
She won the 3rd. place award for the US Fish and Wildlife Duck Stamp painting competition out of 200 competitors statewide.
She is featured on the front webpage of her school and district school.


Mayli is a popular online art and comic-strip contributor, known as " koda-soda" on the websiteDeviantArt.com which has 5,000 followers and 155,000 page hits.

"Native Rights and the process from an Oral History perspective."

Independent Scholar and Artist: Todd Leisek
As the Native American population fluctuates and dwindles, Native American blood rights have been an evolving issue over and over. Intermarriage is a very normal situation which could lead to having your rights removed in some tribes. In order to keep the culture consistent and our oral history passed down from generation to generation some Native American tribes are considering DNA testing. Yet, how can scientists rely on what a “tribal” gene says to determine blood quantum in obtaining Tribal rights. And if we are to accept the controversy of DNA testing to further allow individuals to enter the tribal community, we must ask the potential applicants, “why are you establishing tribal affiliations?”

These are just the few of the many dilemmas facing the decisions of tribal organizations for survival coupled with the dilemma of growing intermarriage with partners outside the tribal communities.
The presenter's own families' Oral history played large part in not only his own past ancestral relations with the Oklahoma tribal communities, but also brought these difficulties to the legitimacy of the Indian Rolls in establishing fact, separating fact from fiction. How can we reestablish our roots even with DNA, which would be a few new records with which the records in the past could be rendered completely incorrect?

This is a story of two families: Leiseks and Johnsons.

Bio: I was born in Ogden, UT as Todd Woodmansee, yet grew up with a very correct and diverse step-family in Lodi, CA. My first studies in Fine Arts started in San Francisco where I spent the first 4 years at San Francisco State University for my BA, which was dual emphasize in Art History and Fine Arts. I stayed for additional 3 years teaching for private art/music schools within the Bay Area, traveling around performing and producing artwork in California. In 2003, I received an invitation to study at University of Wisconsin-Superior for a MA in Studio Art in sculpture and ceramics. In addition, I had an opportunity with the University Orchestra and Brazilian Guitar Ensemble to perform in Rio de Janiero, Brazil. After my graduation from UWS in 2006 with a MA, I moved from the cold frigid North to the Quad Cities, IL. For the past few years, I received an invitation for the MFA program at Vermont College Fine Arts in Contemporary theories and Art Installation which I recently graduated in 2013.

I have worked for private and public art/music schools and Higher Education at both the Community and State University levels for about 9 years and 3 years as an online instructor. I have taught art history/appreciation from 1300 to 21st Contemporary Art, Art Theory, Sculpture/Ceramics, music orchestration, and guitar performance.

Doors will be open at 6:30 p.m.
We continue to meet on the 2nd. Floor of the Moline Commercial Club.

Independent Scholar Michael Grady will focus on Stanley's Kubrick's use of fractal theory and knowledge as major theme in his movie production "Eyes Wide Shut".
Brief Presentation follows film. Eyes Wide Shut was Kubrick's final film before his death, and was considered by Kubrick himself to be his best effort over his long career.

Michael Grady has been an Independent Scholar at the Institute for Cultural and healing Traditions since 2003. He is currently dividing his time between business interests in his hometown of Quincy, IL and his residence in Davenport. He is married with three daughters.

Doors will be open at 6:30 p.m.
We continue to meet on the 2nd. Floor of the Moline Commercial Club.

Please Donate
Please send in your donations. Visa is accepted by calling our number.

Send checks and other donations to:
The Institute.
1530 Fifth Ave.
Moline, IL

We also accept donations via LiteCoin. If you would like to donate to our LiteCoin wallet, the address is 1Mrgi5qAmTPw5HoimBGHUvbtr
SMxb8zcvu